skip to main | skip to sidebar

This wall mural commemorates soldiers who were awarded VCs during the First World War. The UVF of the first world war has no connection, other than name, to the paramilitary organisation of the last 40 years. 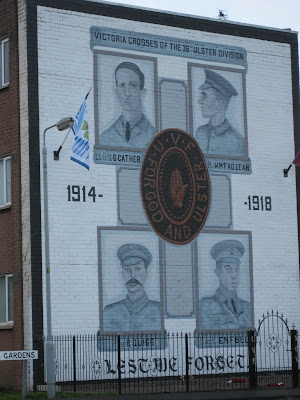 This mural is one of a number painted in an initiative to replace the overtly paramilitary murals of recent years with more positive images of local culture and heritage.
Posted by blueboat at 17:35

Hello from south central USA. I've come to your blog today to see a bit of Ireland. I've never visited there but hope to. So until I actually step foot in your country, I'll visit by way of your blog.

Hi Annie,
Thanks for visiting! I've just been for a look at Little Rock. Lovely photos, I love the one of the moon shot through the trees. I've just been part of DailyPhoto for a few weeks now but am really enjoying it - I love getting a glimpse into other lives and places I've never seen (some that I've never even heard of).